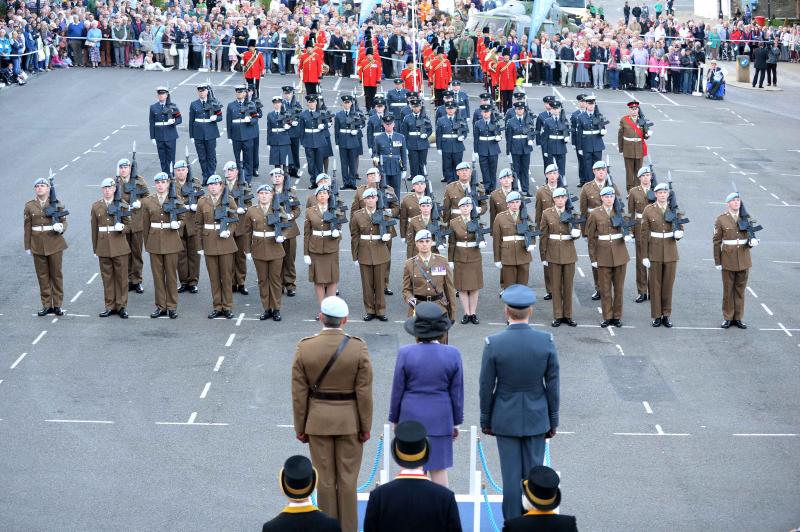 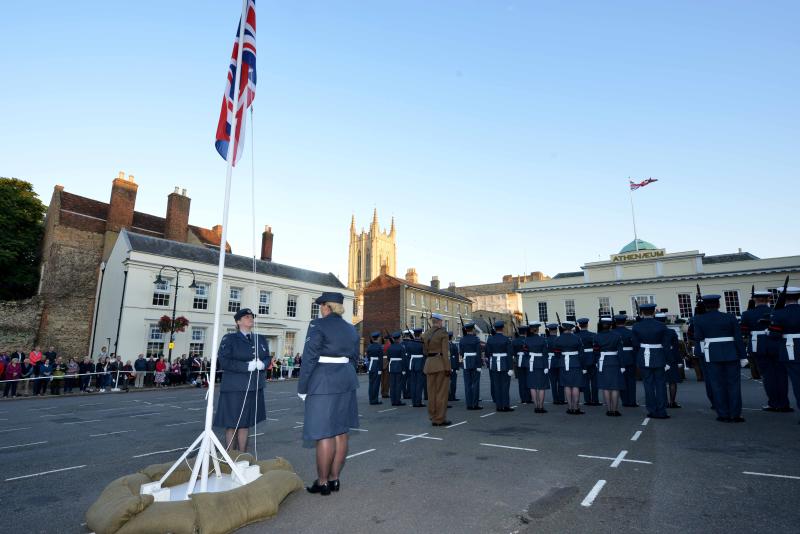 Suffolk’s military and civilian communities have come together to mark Her Majesty The Queen becoming Britain’s longest reigning monarch.

At around 5.30pm on Wednesday 9 September Her Majesty surpassed Queen Victoria's reign of 23,226 days, 16 hours and 30 minutes. The historic milestone, which is tinged with sadness for The Queen as a reminder of the death of her father King George VI, was marked with a sunset ceremony in Bury St Edmunds.

Reservists from the town’s 6 Regiment Army Air Corps joined airmen from RAF Honington and civic dignitaries, including Lord Lieutenant of Suffolk Lady Euston and Mayor of St Edmundsbury Cllr Patrick Chung, for the parade on Angel Hill. A Tornado GR4 from 31 Squadron, based at RAF Marham in Norfolk, made a flypast as the Union Flag was lowered, with music provided by The Band of the Corps of Royal Engineers.

Before the ceremony, a portrait of The Queen was unveiled and a Loyal Toast made by Lady Euston at a civic reception in the Athenaeum.

Lieutenant Colonel Rob Olney, Commanding Officer of 6 Regt AAC and the military lead for community engagement in Suffolk, said: “It has been a huge privilege to join with the people of Bury St Edmunds to mark this historic occasion for Her Majesty The Queen. The sunset ceremony provided a dignified tribute to The Queen’s service to the nation, while also celebrating the strong bonds between Suffolk’s military and civilian communities.”

Mayor of St Edmundsbury Cllr Patrick Chung said: “The Queen has been a great ambassador for the country for more than 60 years. Today has been a day of celebration and it was a brilliant opportunity to bring our families and our communities together to recognise the Queen’s achievement as Britain’s longest reigning monarch. It has also reaffirmed our close working relationship with the town’s 6 Regiment Army Air Corps and the airmen from nearby RAF Honington who I would like to thank for putting on such a great occasion.”

The length of The Queen’s reign has been calculated by experts at the Royal Household to the nearest point of accuracy, taking into account Leap Days in both reigns.

A sunset ceremony is a traditional military parade to signal the end of the day and the mounting of an overnight guard.