The Colonel Commandant, Laurie Wheeden and the Regimental Secretary at Ranville Cemetery, 6 June 2015. 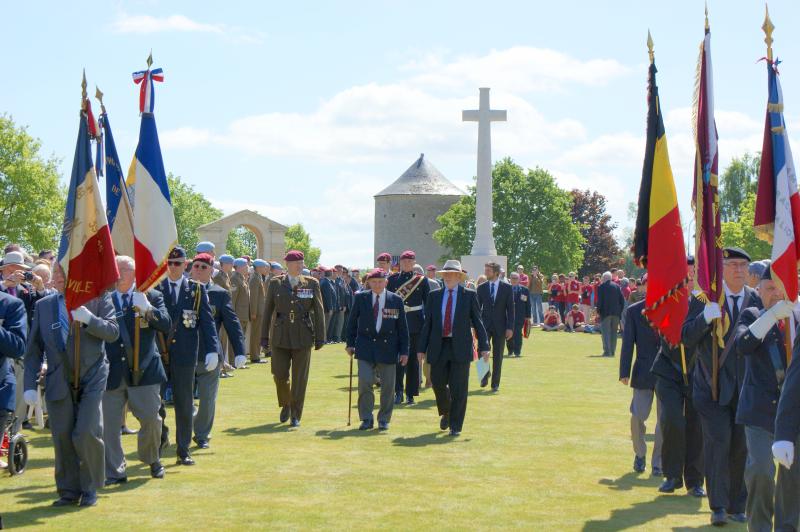 On 6 June, the day’s events began with the Service of Remembrance in the Ranville Cemetery.

Large numbers of local people from Ranville, including local school children, attended the ceremony. Herr Jochen Vogl, the Burgemeister of Motten in Germany, one of Ranville's twin towns, was also in attendance. The speeches were expertly given both in French and English by the Leader of the Veterans Laurie Weedon, who along with the Colonel Commandant laid a wreath at the 13th Battalion Memorial.

The Regimental Pony Mascot and the Pegasus Pipes and Drums led the congregation from the crossroads to the Church where the traditional mass was celebrated. The congregation then moved to the cemetery where wreaths were laid at the French and Belgian War Memorials before moving into the cemetery for the Airborne Service of Remembrance attended by an estimated 1,000 British and French people.

The Reverend Paul Abram conducted a memorable service during which wreaths were laid at the Altar by the Leader of the Veterans, the Colonel Commandant and local dignitaries. The music was again provided by a composite band of the West Yorkshire Police and the Royal British Legion. At the conclusion wreaths were laid at the graves of the Belgian and German soldiers