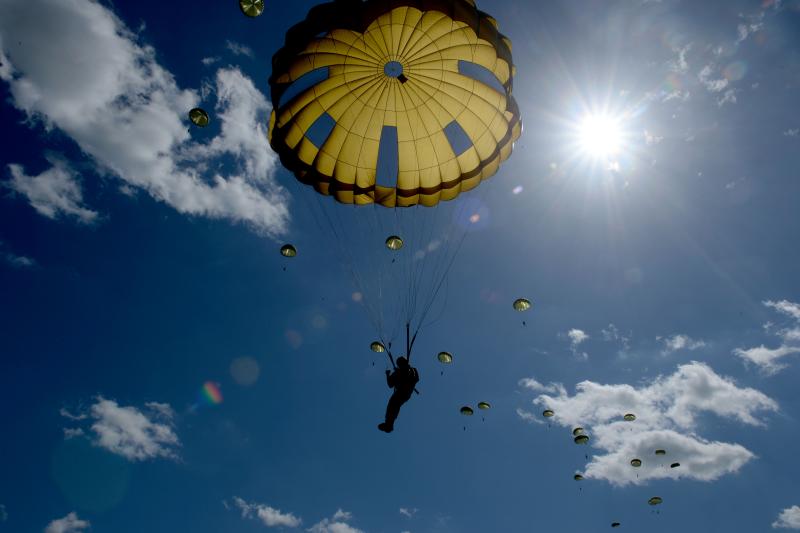 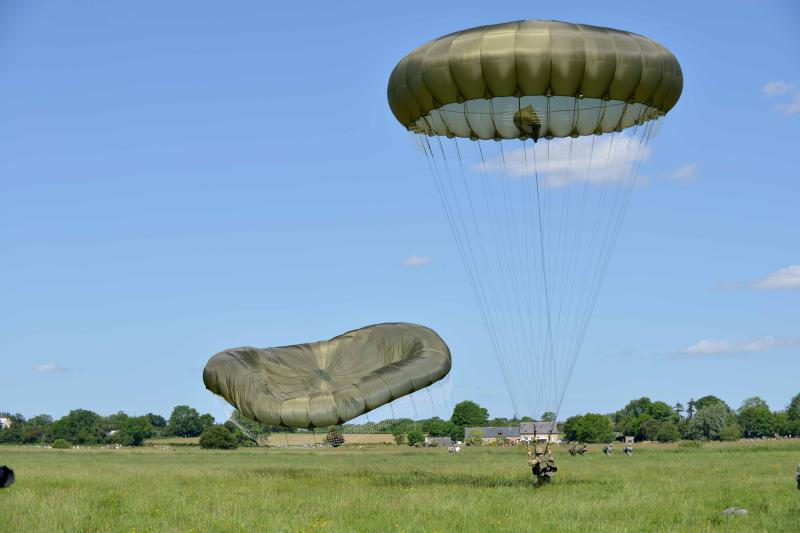 Paratroopers from 16 Air Assault Brigade jumped alongside counterparts from across the world at Ste-Mère-Église in Normandy to conclude commemorations of the 70th anniversary of D-Day.

Nearly 1,000 paratroopers descended onto fields on the outskirts of the town on Sunday (8 June) in a mass jump organised by the American 82nd Airborne Division. The 60 British soldiers joined colleagues from America, The Netherlands, France, Germany and Belgium for the joint jump. The soldiers jumped from 14 Hercules transport aircraft from different nations, including an RAF aircraft, in an impressive display of joint airborne capability in front of a crowd of 40,000 people.

In the early hours of 6 June 1944, American soldiers of the 82nd and 101st Airborne Divisions parachuted in to secure the western flank of the invasion beaches, while the British 6th Airborne Division landed to the east. Ste-Mère-Église became an iconic location after a soldier’s parachute became entangled in the church tower, leaving him hanging over the battle raging below.

Major Chris Walsh, an American exchange officer who jumped on the day, said: “The sort of partnership between the US and UK that we have seen here, as well as the other participating nations, is exactly what is needed to operate alongside one another in places like Afghanistan. It is essential for the execution of combat operations together in the future. Having served with airborne units in the US, it was special for me to participate in the Normandy commemorations and live the history that I have spent so long hearing and reading about.”

Lieutenant Colonel Will Lynch, Commanding Officer of 7th Parachute Regiment Royal Horse Artillery, organised the brigade’s participation in the commemorations. He said: “For 16 Air Assault Brigade, it is a privilege to join our veterans and American colleagues to mark the 70th anniversary of D-Day and honour those who gave their lives for our freedom. The achievements of 6th Airborne Division were vital to the success of the invasion and played a key part in building the formidable reputation of British Airborne Forces.

“The veterans and our current soldiers are the same calibre of men, only separated by age. The determination, controlled aggression and self-reliance needed by a paratrooper in 1944 are required now in our role as the British Army’s airborne rapid reaction force.”