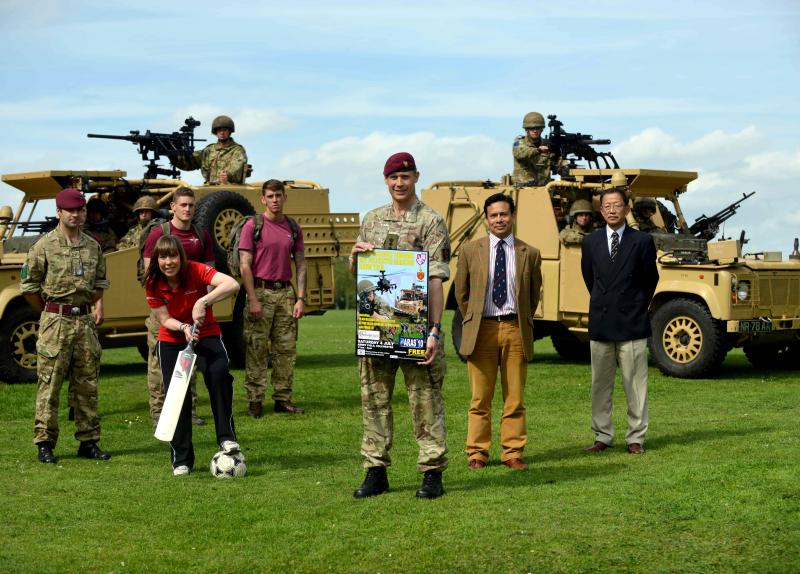 Military displays, charitable endeavour and sport for all will be the three elements of a free Army show in Colchester.

The 16 Air Assault Brigade and Colchester Garrison Show will take place on Abbey Field on Saturday 4 July. Building up to the dramatic finale of an air assault demonstration, the event will showcase the equipment and skills of 16 Air Assault Brigade, the British Army’s rapid reaction force. A collection will support Colchester Nepalese Society’s fundraising for relief efforts after last month’s earthquake in Nepal.

Integral parts of the Show include the PARAS’ 10 endurance challenge and Active Essex, the County Sports Partnership for Essex, will be hosting a schools’ and families’ QuadKids athletics competition and the opportunity to try a number of different sports and meet Essex athletes.

It is the second running of the show, with the inaugural event in 2013 attracting some 20,000 spectators.

Colonel Gary Wilkinson CBE, Commander of Colchester Garrison, said: “The Show is about linking Army units based at Colchester, Wattisham and Woodbridge with the community in which they live and work. Local residents are hugely supportive of soldiers and their families and it is important that the Army gives something back in return. The Nepalese community is a significant part of the local population, both military and civilian, and it is important that we all support their efforts to rebuild their home country after the recent earthquake.

“The Show will combine the chance to see 16 Air Assault Brigade in action, alongside the equally impressive fundraising and physical effort of PARAS’ 10 and the opportunity for everyone to get involved in sport with Active Essex. It promises to be an exciting, interesting and entertaining day that I would invite everyone to attend and be generous in their support of the collection for Nepal.”

Key pieces of equipment on display will include the Apache attack helicopter, bridging equipment and a field hospital that can be deployed by parachute. Among flypasts by military helicopters, The Parachute Regiment’s Red Devils freefall display team will drop in with prizes for the QuadKids competition and military bands will set the proceedings to music.

The PARAS’ 10 is a 10-mile run open to all that can be completed as a cross-country race in trainers or as the P Company Challenge, wearing boots and carrying a 35lb rucksack. With a target to finish within 1hr 50mins, the challenge replicates one of the fitness tests for Airborne soldiers.

Profits from entrance fees raise money for Support Our Paras, the charity helps Paras and their families who are in need and maintains the Regiment’s spirit and heritage, but runners are free to raise money for any charity. Some 800 people competed in the event’s third running in Colchester in May 2014, with the route taking runners through Merville Barracks and Friday Woods, using the same hills and water obstacles crossed by soldiers on training runs.

Active Essex will be running a QuadKids athletics competition for schools in the morning and the opportunity for the whole family to take part in the afternoon. Running alongside this will be the chance to try a variety of sports including handball, volleyball, golf, cricket, football, orienteering, netball, bowls and table tennis. There will also be appearances and the chance to meet Active Essex Inspired Athletes for photos and challenges.