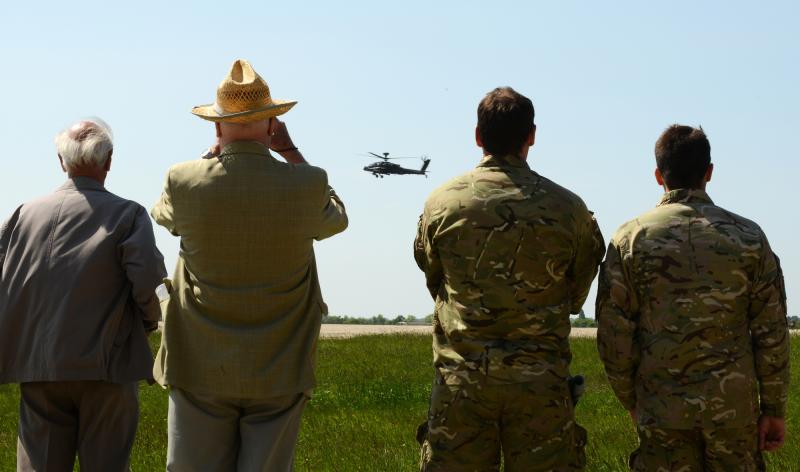 An Army aviation squadron has celebrated 70 years of flying, half of which has been spent on operations.

656 Squadron, part of 4 Regiment Army Air Corps, was formed during the Second World War to fly artillery observation missions in Auster aircraft and is now at the forefront of operating the Apache attack helicopter.

The anniversary was celebrated with a get-together for serving soldiers, veterans and families at the unit’s base at Wattisham Flying Station on Friday (7 June), including an Apache flypast.

Major Piers Lewis, officer commanding 656 Sqn, said: “It’s important to bring everyone together to mark the anniversary because it is our soldiers, past and present, who make the squadron what it is. Mixing across the generations helps create the sense of identity and purpose that is behind our successful history.

“656 Squadron started in the Second World War in flimsy Auster aircraft and is now at the forefront of operating the Apache. We were the first frontline squadron to receive the helicopter in 2003, the first to put it onboard a Royal Navy ship in 2005, the first to deploy to Afghanistan in 2006 and then flew the first operational sorties from a ship in 2011.”

Among veterans at the celebration was Vince Weaver, who was among the first soldiers to join the squadron when it was formed in December 1942 from a mix of RAF and Royal Artillery personnel. The 90-year-old from Walthamstow, East London flew missions as an observer and radio operator in support of operations against the Japanese in Burma.

He said: “We flew over the jungle spotting targets for the artillery, and then observed where the shells landed and correct their fire. It’s been great to come back and meet the current soldiers, who’ve got the same approach to life and work as we had in Burma. The Apache is far a more solid aircraft than the Austers we were flying in, and it’s amazing to see the advances in technology.”

After the Second World War, the unit was based in Malaya throughout the campaign against Communist guerrillas from 1948 to 1960, before taking part in peacekeeping operations in Rhodesia, the Falklands War and two deployments to the Balkans. Aircraft it has flown include the Tiger Moth biplane, seven different marks of the Auster and Scout, Lynx and Gazelle helicopters.

Since equipping with the Apache, the unit has deployed on three tours of Afghanistan and during the NATO-led Libya operation in 2011 flew the helicopter’s first operational missions from onboard a Royal Navy ship.

Lieutenant Colonel (Retd) Andrew Simpkins, a former officer commanding and president of 656 Squadron Association, said: “656 Squadron has a rich history that we are rightly proud of. The squadron has been deployed on operations for half its life and has flown more operational hours than any other flying squadron, be that Army Air Corps, RAF or Royal Navy.”

Airtrooper Samual Cowlishaw, 23 from Baldock in Herts, said: “I’ve only just posted into the squadron and it’s been interesting to hear veterans’ stories of what the unit has done in the past. The banter is just the same and they’ve got the same spirit of achieving on operations.

“I’ve come from a Lynx unit and the Apache is a different helicopter to work on in different environments. It was a really good experience to get onboard a ship and be part of developing the Apache’s capability to operate with the Royal Navy.”