Soldiers and students prepare together for international crisis, 11 June 2013. 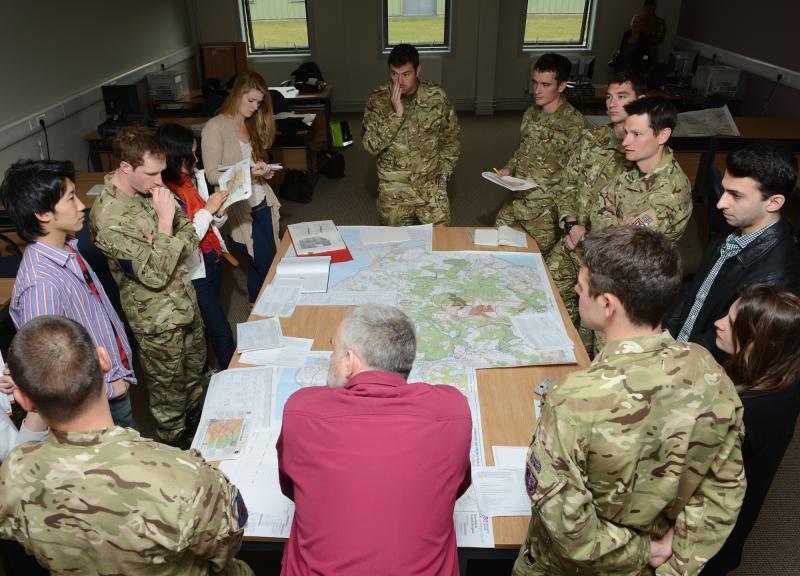 Army officers and students have joined forces to plan for an international crisis and gain an insight into each other’s thinking.

Postgraduate students from the University of Essex’s School of Law and Human Rights Centre and officers from 23 Engineer Regiment (Air Assault) worked together to plan a response to a fictional humanitarian crisis.

The exercise was based around a fictional area disputed by two nations divided by economic and ethnic factors. Students and officers planned how to tackle the interlinked problems of famine, the mass movement of refugees and securing the area against insurgents. Their conclusions were briefed to Lieutenant Colonel Jason Hones, Commanding Officer of 23 Engineer Regiment (Air Assault), and Professor Geoff Gilbert, head of the University’s School of Law.

Lt Col Hones said: “This scenario is exactly the kind of situation that we could be tasked to deal with as part of 16 Air Assault Brigade, the Army’s airborne rapid reaction force. Anywhere we go in the world we can expect to be operating alongside NGOs, which is the employment that these students are working towards.

“The military and NGOS are likely to have different, but often complementary, goals on an operation. This training is about learning about each other to understand our differences and identify the similarities so that we are able to collaborate more effectively.”

Prof Gilbert said: “This is a very important tool in preparing our students for their future careers. Many of our Masters graduates find careers that involve working alongside the military in the more challenging parts of the world and it is vital that they have a proper understanding of what a humanitarian crisis looks like on the ground.

“A key lesson students have learnt is that the Army is not just about fighting an enemy, but it considers humanitarian factors and how to work alongside the local population and non-military actors.”

Among the students taking part was Emily Peel, who is studying International Human Rights and Humanitarian Law. The 23-year-old from Sevenoaks, Kent said: “Most of us aspire to working with NGOs in the field, which is likely to involve working with the military. We’ve studied examples of that interaction in the classroom, but this training is a fantastic opportunity to work with the Army and gain first hand insight into how it thinks and acts.”

Lieutenant Mark Borley, 24 from Newcastle, said: “As engineers we tend to have more interaction on operations with humanitarian agencies than other military units. It’s been useful to work with the students to understand how NGOs work and the mindset of their staff.”