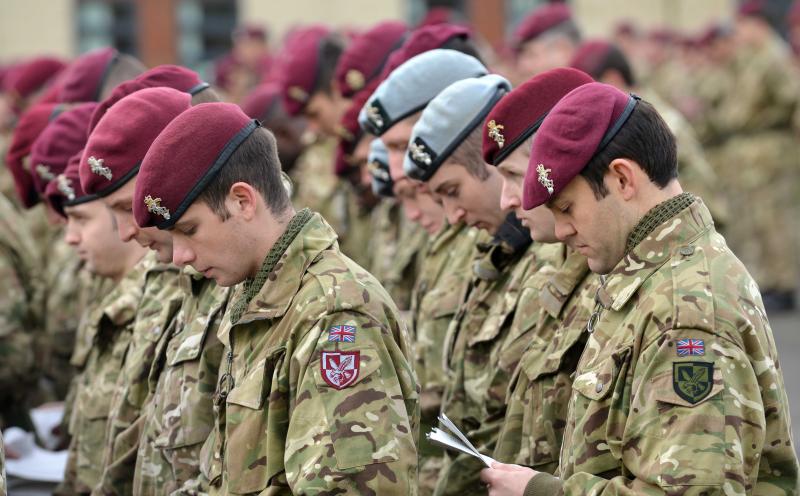 A Brigade whose troops were among the first and last to serve on operations in Afghanistan has joined together to commemorate its commitment and pay tribute to its soldiers killed while serving in the country.

Paratroopers from 16 Air Assault Brigade provided security in Kabul in 2002 after the overthrow of the Taliban and led the first major deployment into Helmand Province in 2006, while its Apache attack helicopters were deployed from 2006 until British combat operations ended in late 2014.

A parade at Colchester’s Merville Barracks today (Fri 16 Jan) formally marked the end of 16 Air Asslt Bde’s involvement in Afghanistan and honoured the memory of the 58 soldiers killed while under the brigade’s command.

Some 1,000 soldiers from all of the units that deployed with 16 Air Asslt Brigade, plus civilian support staff, were on parade for a short but solemn service that including the reading of the names of the soldiers who gave their lives. Music was provided by The Band of the Parachute Regiment.

The Brigade Senior Chaplain, Reverend Alan Steele MBE, who deployed to Afghanistan on three occasions with the Brigade, said: “In December 2014 the last soldiers from 16 Air Assault Brigade returned home from operational deployments to Afghanistan, bringing to an end a commitment to that theatre of operations which began in January 2002. It is important that we, as a Brigade, gather together to mark this moment and pause to reflect on our overall involvement in Afghanistan.

“Afghanistan was a demanding commitment and we, as a Brigade, have learned much over the last 13 years. It is appropriate, therefore, to take time to consider all that has been achieved and the Brigade’s contribution to bringing stability to Afghanistan. It is appropriate, too, to acknowledge that this contribution was achieved at the cost of the 58 soldiers who died while serving with the Brigade in Helmand, and to remember them and honour their sacrifice, as we now prepare to face our next operational task in a very uncertain world.”

The Brigade’s deployments to Afghanistan were:

- 2002, Op FINGAL. A battlegroup based around 2nd Battalion The Parachute Regiment provided security in Kabul for three months after the overthrow of the Taliban;

- 2006, Op HERRICK 4. A battlegroup based around 3rd Battalion The Parachute Regiment was the first British troops to move into Helmand Province;

-2008, Op HERRICK 8. Both the 2nd and 3rd battalions of The Parachute Regiment deployed on operations together for the first time since the Falklands Conflict. A key achievement was the delivery of a hydroelectric turbine to the Kajaki Dam; and

- 2010/2011, Op HERRICK 13. The full brigade deployed with key achievements include improving security by driving insurgents out of several communities in Nahr-e Saraj and Nad-e Ali districts; supporting the training of Afghan National Security Forces; and helping with reconstruction and development work.

Captain Joe Scrivener, of 3rd Battalion The Parachute Regiment, deployed on the Brigade’s three HERRICK tours. “It is very important to gather like this to formally bring our involvement in Afghanistan to a close and it was a very poignant service,” he said. “I knew many of those killed, some as close friends, and to hear their names read out was extremely moving.

“The three tours were the best of times and the worst of times, but we did what was asked of us and I am extremely proud of the positive effect we had in Afghanistan. When I left in 2011, schools and shops were opening and the Afghan National Army was growing in capability and confidence.”

The Apaches, based out of Wattisham Flying Station in Suffolk, were deployed continuously in Afghanistan from 2006 until the end of 2014. As well as precision strikes in support of ground troops, their role was to escort helicopters and land convoys and provide a near all-weather surveillance capability.

Major Simon Wilsey, of 4 Regiment Army Air Corps, completed five four-month deployments flying the Apache. He said: “Afghanistan has been the proving ground for the Apache and we have been able to fully integrate it into the British Army’s way of operating and show that it can be a battle-winning asset. Operations evolved massively, from very demanding tours flying in support of British troops in combat to a more stable and settled country that Afghan forces were policing.

“This service has been very important to gather the entire Brigade together and reflect on what we have achieved in Afghanistan and pay tribute to those who made the ultimate sacrifice.”