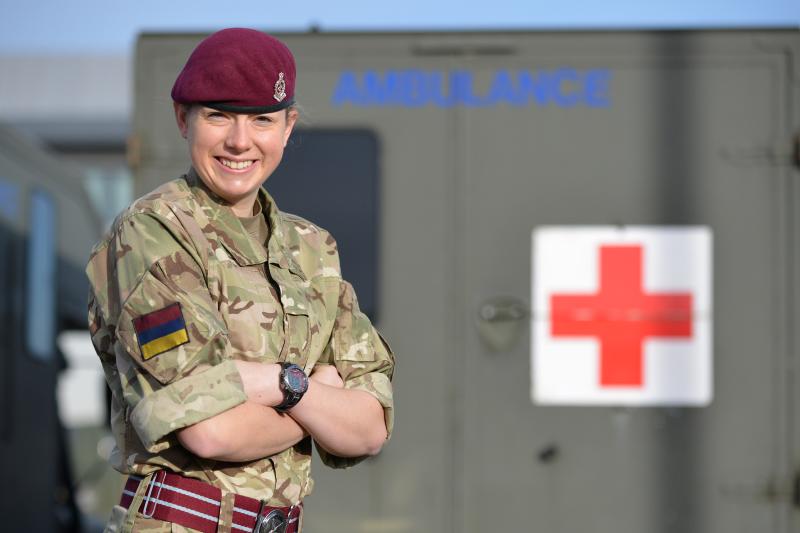 An Army medic has received double recognition for her sporting prowess in the space of a week.

Private Kimberley Preston - who competes for the Army in triathlon, swimming and cycling - has been named runner-up in the rising star category at the Army Sports Awards and Female Sports Personality of the Year in the 2014 Sport Colchester Awards.

Pte Preston, 21 from Stonehaven in Aberdeenshire, is a combat medical technician with Colchester-based 16 Medical Regiment. She collected the Colchester award from Cllr John Elliott, the Mayor of Colchester, at the town’s Weston Homes Community Stadium on Monday (24 Nov), before attending the Army Sports Awards at the Guildhall in London on Thursday (27 Nov).

The two awards cap a successful sporting year for Pte Preston. In the triathlon she finished in the top ten in her age and gender categories at both the London and Windsor triathlons. She set a personal best of 2hr 5min in London at the Olympic distance, which is a 1.5-kilometre swim, 40-kilometre bike ride and 10-kilometre run.

Pte Preston, who has been in the Army for 18 months, said: “I’m very proud to be recognised, both by the Army and locally in Colchester. It’s great to be able to balance being both an athlete and a soldier, because I get time off to train and race but when I’m at work I get treated no differently to any other soldier. For me it’s as important for the Regiment to be recognised because of the support I am given.”

Pte Preston, a former pupil of Mackie Academy, is aiming to break into the British team next season and compete on the European circuit.

She said: “I’ve been swimming competitively since I was six and started to get interested in triathlon when I was 13. I love triathlon because of the variety. With three disciplines there’s always something different to do in training so you never get bored and you can always break it up into the individual events.

“I build my training around work and I’m usually up at half five every morning to train. I’ll swim every morning and do two track running, four bike and three gym sessions across the week, with a long run at the weekend.”

Lieutenant Colonel Philip McNee, Commanding Officer of 16 Med Regt, said: “As a Regiment we are immensely proud of Private Preston and her achievements in the triathlon deserve the recognition they have received. The commitment she displays to her sport, achieved at no detriment to her role as a combat medical technician, is an example to all soldiers of what they can achieve as individuals.”