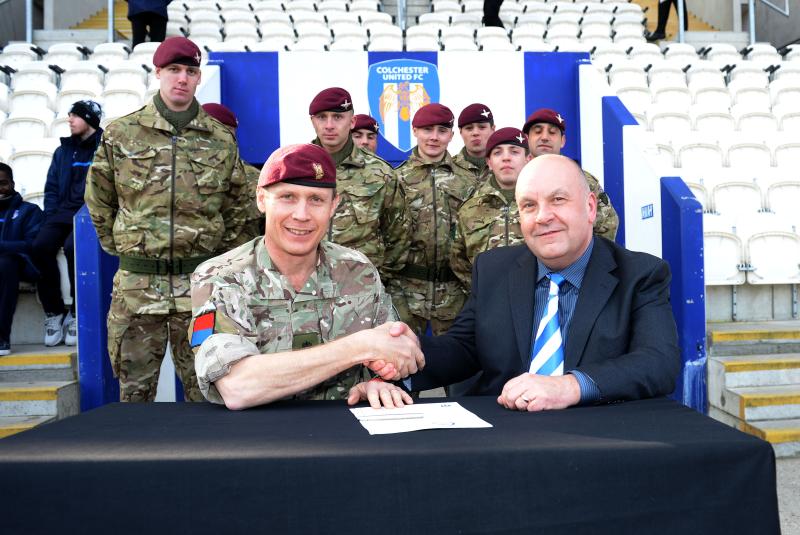 Colchester United have shown their support to the town’s military community by signing the Armed Forces’ Corporate Covenant.

In a show of support to the town’s armed forces, Colchester United and their Football in the Community programme will:-

- make both serving and former soldiers aware of employment opportunities at the club where relevant.

To mark the signing, soldiers from the town's 16 Air Assault Brigade and 3rd Battalion The Royal Anglian Regiment, the Army Reserve infantry unit that recruits from Essex, were at the Weston Homes Community Stadium with some of their vehicles and equipment.

U’s General Manager Tim Waddington said: “We are hugely proud of the armed forces based in Colchester, and the club have a long standing association with the regiments who call the town their home.

“Serving soldiers have often adopted Colchester United as their team whilst deployed locally and, by signing the Corporate Covenant, the club are hoping to further strengthen those links and work closely with the Army in the coming years.”

The U’s are only the third Football League club to sign up to the corporate covenant. It is hoped that other teams will follow the Essex side’s lead and work closely with the armed forces, their families and veterans.

Colonel Gary Wilkinson CBE, Commander of Colchester Garrison, said: "The Army and Colchester United FC are both important institutions in Colchester that provide an opportunity for the town's military and civilian communities to mix through a shared love of sport.

“By signing the corporate covenant, we have formalised the existing supportive relationship there is between Colchester United and the Army in Colchester. I look forward to continuing to work together for the benefit of all.”