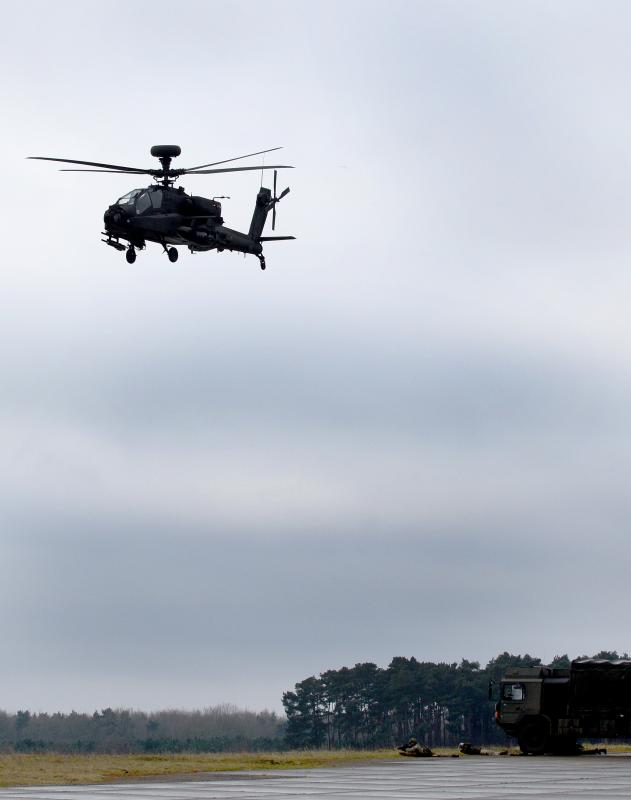 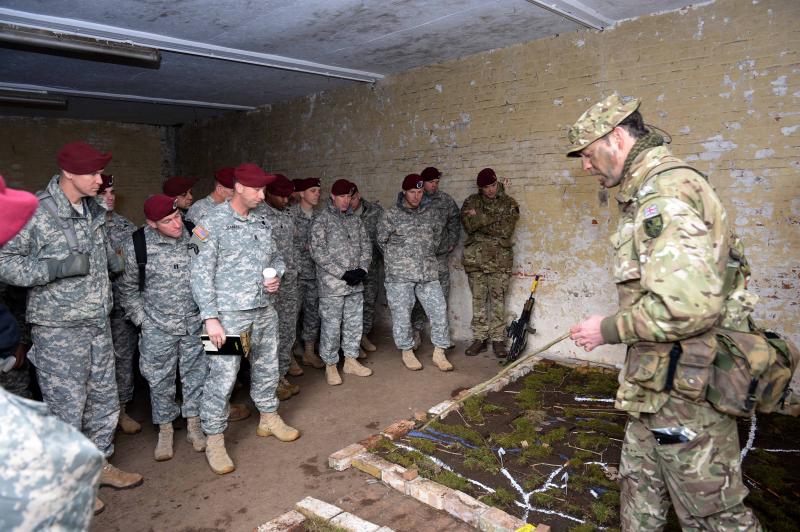 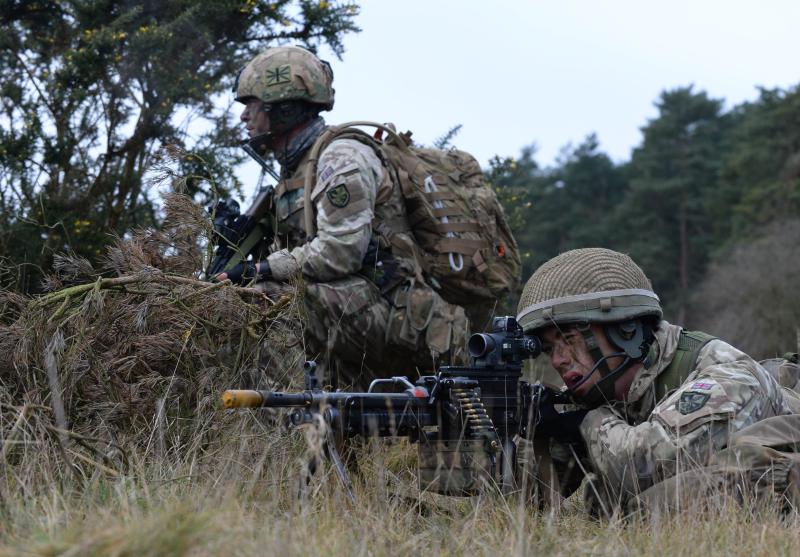 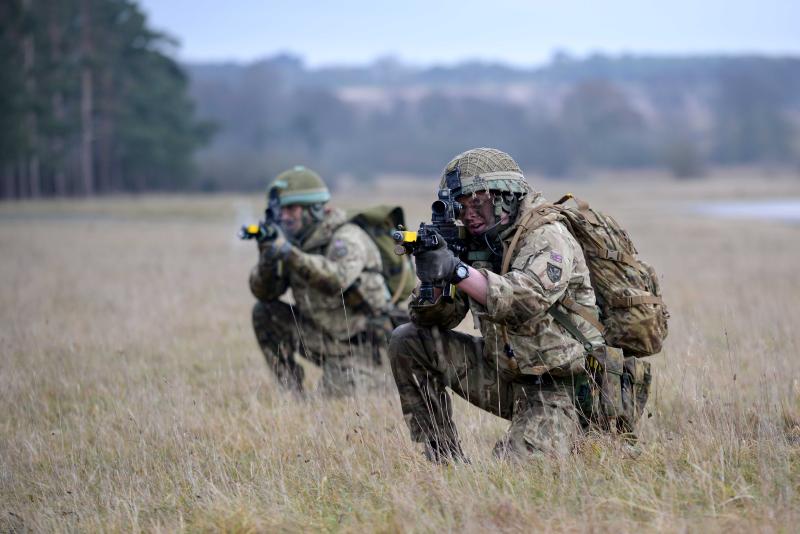 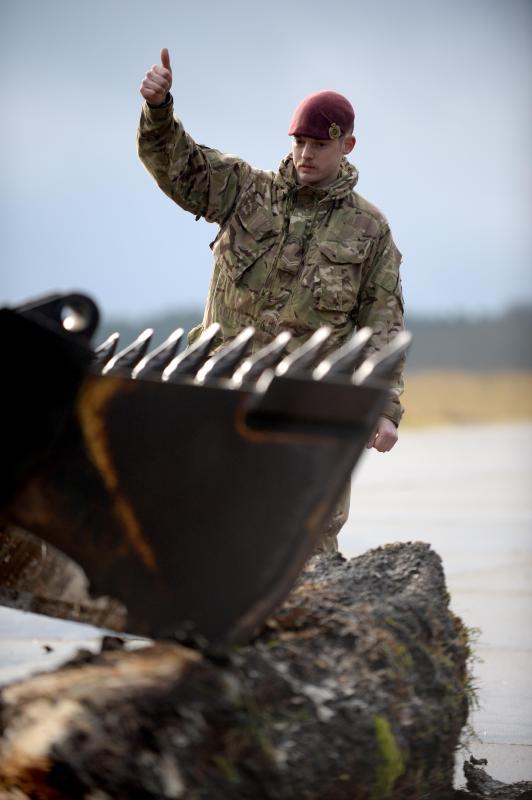 Soldiers from 16 Air Assault Brigade, the British Army’s rapid reaction force, have practised the skills needed to seize an airfield as they prepare for a major training exercise in America.

Exercise Red Prepare saw the paratroopers of 3rd Battalion The Parachute Regiment assault an airfield on the Stanford Training Area in Norfolk today (Wed 4 Feb), with close air support from two Apache attack helicopters from 3 Regiment Army Air Corps. Once it was secured, 23 Engineer Regiment (Air Assault) followed up to clear obstacles, remove unexploded ordinance and fill craters to bring the runway back into use.

A delegation of senior officers from the American 2nd Brigade Combat Team, 82nd Airborne Division (2 BCT) watched the training. The 800-strong 3 PARA Battlegroup from 16 Air Asslt Bde is heading to Fort Bragg in North Carolina in March for a six-week exercise with 2 BCT. The Combined Joint Operational Access Exercise (CJOAX) will test the ability of the two formations, which both serve as their respective armies’ rapid reaction forces, to deploy together on operations.

Brigadier Nick Borton DSO MBE, Commander of 16 Air Asslt Bde, said: “We are developing interoperability between 16 and 82 and CJOAX will be an important milestone in the process. With the end of combat operations in Afghanistan, both formations are looking to future challenges. We both serve as high readiness reaction forces and it makes sense to train with a key ally so we are able to operate together.”

Lieutenant Colonel Kenneth Burgess, Commanding Officer of 2 BCT’s 1st Battalion, 325th Airborne Infantry Regiment (1-325th AIR), said: “This visit gives us an opportunity to better appreciate and understand the capabilities of 16 Air Assault Brigade and how they would conduct this type of operation. We laid out a path last year to build the scale and capabilities of our relationship, and it is progressing well.”

A company from 3 PARA trained in Fort Bragg with 1-325th AIR last summer.

Lt Col Burgess said: “We learnt that paratroopers are the same in both armies - fit, disciplined and motivated soldiers using very similar tactics. A British company worked well within the battalion, and CJOAX is taking a battlegroup within our brigade combat team.

“If British and American paratroopers can operate together it gives another option to our countries’ policy makers to respond to crises affecting our shared national interests.”

The 3 PARA BG is currently serving as the Air Assault Task Force, held at high readiness to deploy on operations around the world, while 2 BCT is training to become the US Army’s equivalent as the Global Reaction Force. Airfield seizure is a key skill for the rapid reaction role, allowing the capture of a foothold for further troops and equipment to arrive and develop operations.

3 PARA’s Pte Anthony Scott, 25 from Maldon, Essex, said: “This was a good chance to run out our skills and drills and work with Apache helicopters. We tabbed onto the area last night, attacked and captured buildings to harbour in, did a recce of the airfield and then did the attack, which went very well. I’m looking forward to the American exercise. It will be a good opportunity to train alongside our American colleagues and learn more about how they do business.”

The process of developing interoperability has seen British and American headquarters staff work together to integrate command and control procedures and units have carried out field training together in both countries.

23 Engr Regt (Air Asslt)’s Lance Corporal Mark Langley, 26 from Redditich, said: “I went to Fort Bragg last year to work with the 37th Engineer Battalion, which is our direct counterpart. They are highly specialised in airfield seizure skills, whereas we have more general engineering skills such as water supply and bridging. It’ll be good to go back and continue to work together - they can teach us from the depth of their specific skills, and they are keen to learn from our breadth of capabilities.”