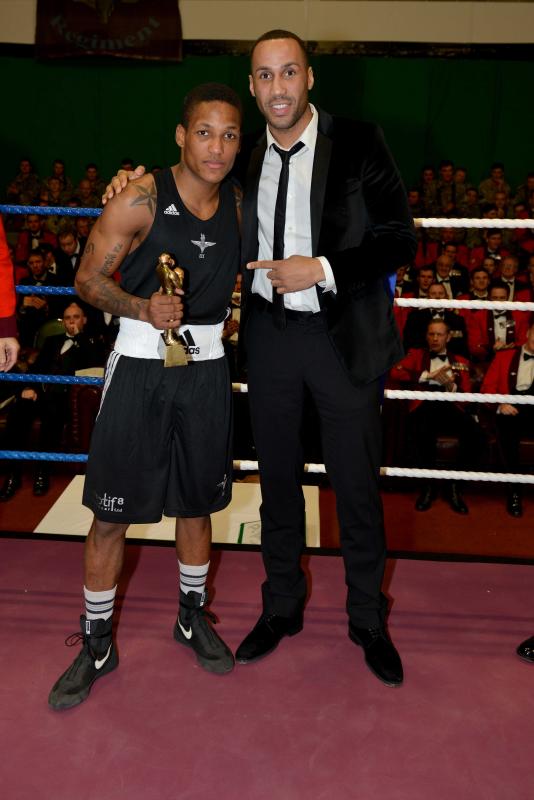 Olympic gold medallist boxer James DeGale cheered on 3rd Battalion The Parachute Regiment as they punched their way to progress in the Army’s boxing competition.

Second Lieutenant Alex Lewis, 26 from Poole, who won his middleweight bout for 3 PARA, said: “I was quite nervous, but when you pull on that 3 PARA strip and you've got the whole battalion behind you it does genuinely pick you up. You're not just boxing for yourself, you're boxing for everyone around you. All the guys performed well and we're really happy with that as a team.” 4

RIFLES' Corporal Mark Zareh, 27 from Glasgow, who narrowly lost his light-welterweight bout, said: “I can honestly say that when I came out of the ring I knew that I had given everything that I could have possibly given. It's very disappointing because you put in a lot of work to get to this stage. It's relentless training day in day out, giving up weekends and training every day for about four to five hours.”

DeGale, who won middleweight gold at the 2008 Beijing Olympics, has had links to 3 PARA since the boxing team visited his gym during their successful run to claiming the Army title in 2013. In October 2014 he visited the unit at Merville Barracks to gain an insight into military life.

The 29-year-old said: “It's good to be back here in Colchester. There's a great atmosphere, with 3 PARA really getting behind their guys. The boxing has been great and really entertaining, they don't mess about, they're fit boys and they give it their all.”

3 PARA has a proud tradition of success in the ring, having won the Army boxing title each time it has taken part since 2003. The unit did not compete in 2006, 2008 or 2011 because it was deployed in Afghanistan and in 2014 due to training commitments. The boxers are all soldiers first and trained to deploy as part of the Air Assault Task Force (AATF), which is maintained by 16 Air Assault Brigade to be ready for operations anywhere in the world at short notice.