Soldiers cycle round the clock for charity, 17 March 2015. 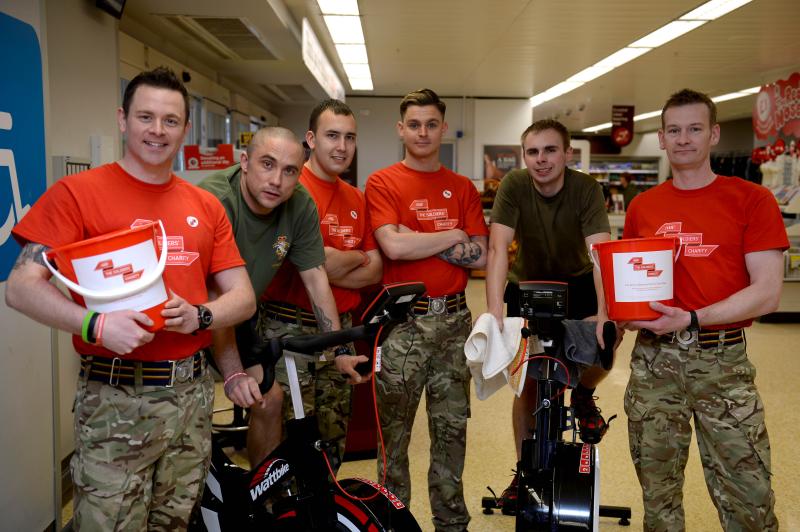 A team of Wattisham-based soldiers have been riding round the clock to raise money for ABF The Soldiers’ Charity.

The six-strong chain gang from HQ Company, 7th Air Assault Battalion Royal Electrical and Mechanical Engineers are aiming to cycle 500 miles on exercise bikes in two 12-hour stages outside local supermarkets. The first leg was cycled at Sainsbury's in Ipswich on 17 March from 8am to 8pm, with the second instalment taking place at Morrisons in Hadleigh on Thursday 19 March.

The endurance challenge was the idea of Sergeant Steve Parnell.

The 31-year-old from York said: “I’m a keen cyclist and wanted to do an event to both build up team spirit within the company and raise money for ABF The Soldiers’ Charity. It’s the Army’s own charity, run by soldiers for soldiers, and it understands our needs. I know quite a few people who’ve been helped by it and wanted to do my bit for them.

“It’s been quite tough going, but we’re all working well together. The guys have been stints of 30 minutes each, and are having to keep their speed at 22 miles per hour throughout to stay on course for the distance. What’s really kept out morale high has been the generosity of the public - people have been putting £20 notes in the bucket, but even the smallest chink of loose change lifts your spirits.”