An Apache at the Royal International Air Tattoo at RAF Fairford, July 2014. 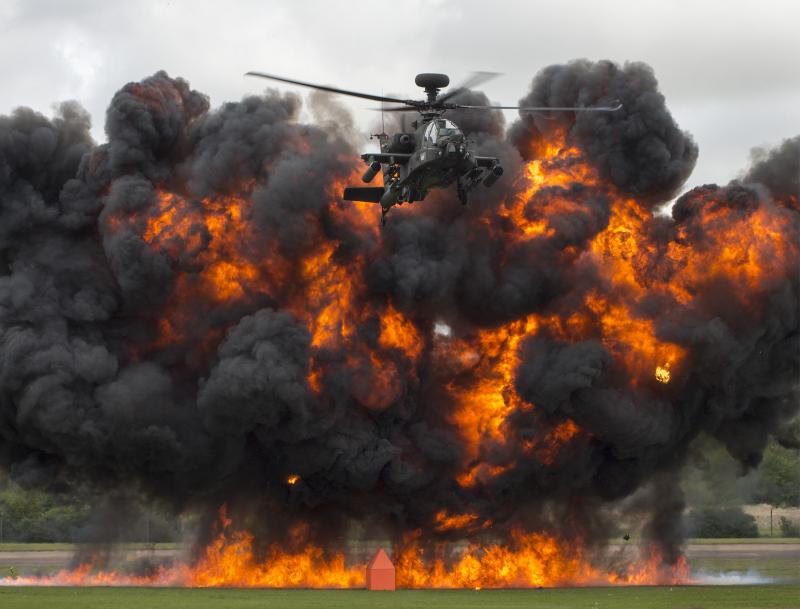 The smoke and flames gave the crowds an amazing view and photo opportunity. Helicopters from the Army Air Corp (AAC) have been on display at the Royal International Air Tattoo (RIAT) at RAF Fairford this weekend.

The Apache attack helicopter put on an impressive display to the crowds including missile attacks using pyrotechnics to simulate the helicopters arsenal of weaponry.

This photograph of an Apache flying in front of a billowing cloud of fire and smoke at the Royal International Air Tattoo at RAF Fairford was chosen by public vote as the best image in the 2014 Army Photographic Competition.

The Attack Helicopter Display Team (AHDT) has been presented with the Pooley Sword, which is awarded annually to an individual or group who have “made a significant and concerted contribution to the Attack Helicopter Force at home or on operations”.

The team from 3 Regiment Army Air Corps, based at Wattisham Flying Station in Suffolk, carried out 10 displays this year, including six major air shows and the national event for Armed Forces Day in Stirling.