The Attack Helicopter Display Team after being presented with the Pooley Sword, November 2014. 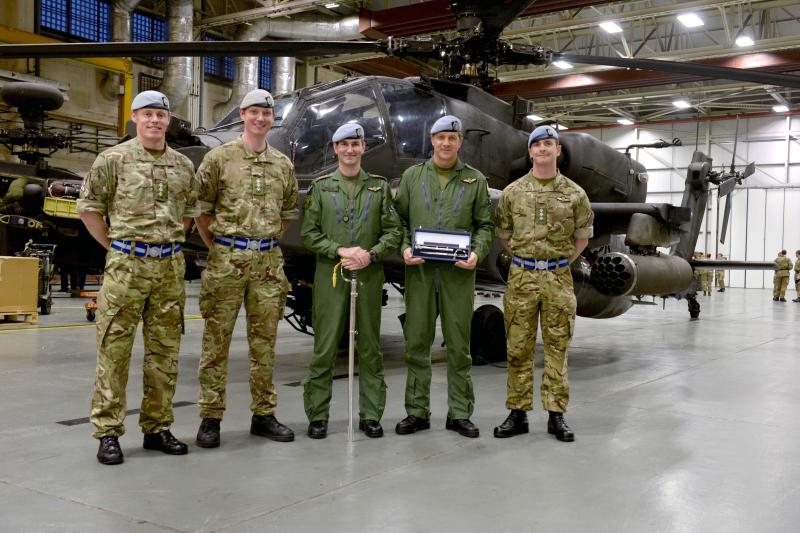 The soldiers behind explosive displays that saw the British Army’s Apache attack helicopter fly in front of 500,000 people at air shows this year have been honoured.

The Attack Helicopter Display Team (AHDT) has been presented with the Pooley Sword, which is awarded annually to an individual or group who have “made a significant and concerted contribution to the Attack Helicopter Force at home or on operations”.

The team from 3 Regiment Army Air Corps, based at Wattisham Flying Station in Suffolk, carried out 10 displays this year, including six major air shows and the national event for Armed Forces Day in Stirling. A photograph of an Apache flying in front of a billowing cloud of fire and smoke at the Royal International Air Tattoo at RAF Fairford was chosen by public vote as the best image in the 2014 Army Photographic Competition.

The award was presented to the AHDT by Colonel Jason Etherington, Commander of Wattisham Flying Station. The citation praised the team’s “hours of personal sacrifice, professionalism and constant drive for excellence” that has seen it “push the boundaries to produce an unrivalled display performance”.

AHDT manager Captain Chuck Nicol said: “It’s wonderful to receive this recognition for a lot of hard work across the year by the 12-strong team of ground crew, REME technicians and aircrew. Our aim is to improve public understanding of the role of the Attack Helicopter Force by telling the story of its work on operations in Afghanistan.

The scenario showcased the agility and speed of the Apache, with pyrotechnic explosions simulating its gunfire and rockets and real time radio transmission between the pilot and simulated ground forces bringing the display to life.

Capt Nicol said: “Our aim for next season’s display is to move the Apache story on from Afghanistan. As the AH Force prepares for the uncertain challenge of contingency operations, our display will change to reflect that.”