Members of 3 Regt AAC with their campaign medals, 13 November 2014. 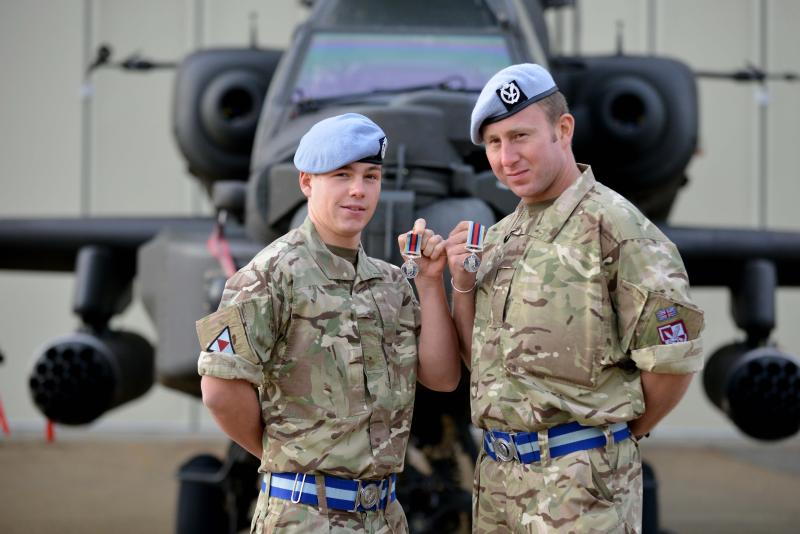 3 Regiment Army Air Corps (3 Regt AAC), which is based at Wattisham Flying Station in Suffolk and operates the Apache attack helicopter, held a medal parade today (13 Nov) to mark the return of its final contingent of troops from Helmand Province.

Among soldiers receiving a campaign medal, awarded to soldiers after their first tour, was Airtrooper Owen Jones, a class 2 Apache groundcrew soldier.

The 19-year-old from Buckley in North Wales said: “It has been a proud occasion to receive my campaign medal alongside the friends I served with in Afghanistan. As groundcrew our role is to refuel, rearm and move the Apache on the ground so it is ready for operational missions. The tour was a great opportunity to do my job for real and put into practice the skills I’ve learnt since joining the Army.”

Airtrooper Mike Colton was one of four Reservists from 6 Regiment Army Air Corps to deploy with 662 Sqn. The 31-year-old from Taunton, who works in the security industry, said: “The tour was a really good experience and we all worked really well together as a team.

“I’d always wanted to join the Army when I was younger, but life and my civilian job took over. I suddenly realised four years ago that I was only getting older and had to do something about it, so I joined the Reserves. It’s been a different challenge and I’ve learnt some interesting new practical skills, as well as developing my confidence and teamwork.”